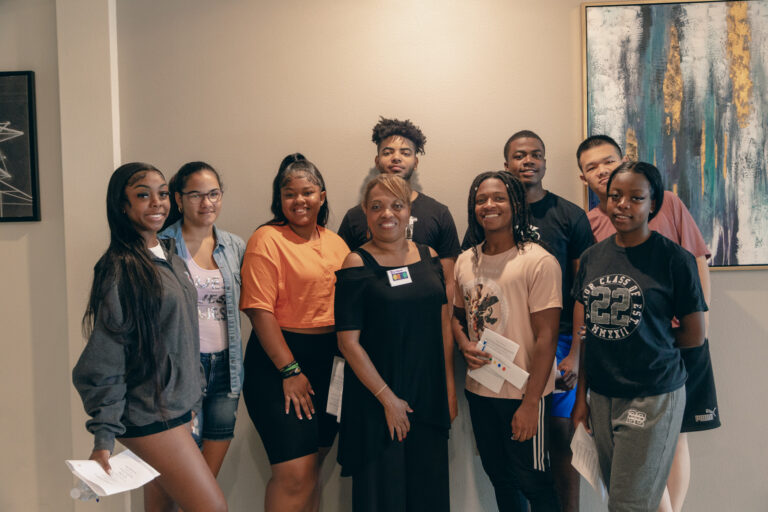 The Summer 201 program is a two-day retreat that kicks off our graduating senior Scholars’ transition to college. The weekend is made up of a series of workshops and activities meant to help them prepare to navigate the challenges of college life.

This year’s retreat was planned and led by Sarafina Shepherd, one of our college success coaches. She mentors Scholars through their college journey, meeting with them monthly to see how they’re faring.

“College is hard,” stated Sarafina, “sometimes when we think about college, we think of just attending classes and doing homework. We don’t think about the other aspects that come with it.” In addition to study skills and time management, the retreat’s itinerary touches on things like conflict resolution, social skills, mental health, and more.

Some students will be leaving home for the first time to go across the country without their usual support system. So, teaching students how to build a community is a key two-part session. “This is something we really drill in, so our Scholars can be successful wherever they are,” said Sarafina.

Something new for this year’s retreat was inviting a recent college graduate and Scholar from Class 4, Kierra Law. Keirra led several workshops on topics such as study skills and getting to know your roommates. “She just graduated, so it was somebody fresh off campus,” said Sarafina, “It was really impactful and the students enjoyed her being there.”

In addition to Kierra, the staff invited several current college students in the Elevation Scholars program to join the retreat for a couple events, including a pool party and a special panel. Sarafina said it was a highlight of the retreat and “the happiest I saw the Scholars all weekend.” They enjoyed being able to sit and talk, asking any questions they wanted. “They had a blast,” said Sarafina.

The retreat is an instructive, yet fun event that helps make the college transition smoother for Scholars. “The transition to college can seem a little intimidating,” said Sarafina. But she wants them to realize that they “have the skills they need to conquer it, and the Elevation staff will always be in their corner to help.”

Our volunteers are invaluable to helping us accomplish our mission.

The Summer 201 program is a two-day retreat that kicks

Applauding the Achievements of our Scholars

We recently held one of our most joyous events of